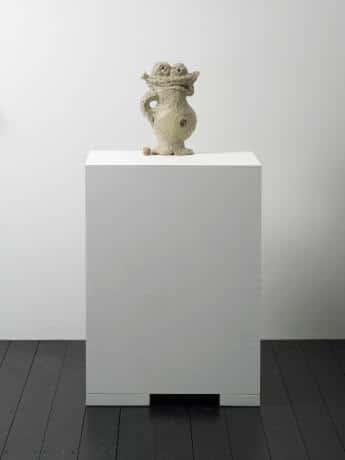 Picasso once paid for a mansion in the South of France with a still-life painting. This anecdote, cited in John Berger’s then-controversial book The Success and Failure of Picasso (1965), came to epitomise a trade-off of product for personality. Only one man could be said to have been as famous as Picasso, claimed Berger, and that was Charlie Chaplin, who had the opposite problem: no one recognised him without the makeup. Yet for both, still life, that traditionally lowliest of genres, was the MacGuffin of an investigation into the outer limits of their respective visual territories. Bottles, glasses, bowls of fruit: in the cubist or early cinematic image, ordinary objects are the apparatus of an experiment into what the painted or projected image can hold.

Catherine Story’s show Angeles retells the synchronicities of early Modernism in works that evoke the recent aftermath of an archaeological dig. Objects apparently blanched into dusty browns and greys are propped on makeshift shelving; bits drop off and roll along the floor. Look at the materials: plaster, mortar, wire – these are preparatory objects, stilled in the process of becoming, like the sinopia of ancient frescoes. Their subjects, though, like their sober palettes, are unmistakably modernist. In United Artists (all works 2011), two white painted clay sculptures stand in awkward communion, their forms at once reminiscent of the early modernist spatial experiments of Georges Vantongerloo and the snub-nosed profiles of early film cameras. Story’s work excavates a moment of historical concurrence in which spatial and temporal dimensions were things to be toyed with, and there is a ludic delight in her anthropomorphic sculptures, gazing goggle-eyed out of the past.

In Chaplin’s Limelight (1952), smashed instruments produce note-perfect music, in a pantomime of Cubism (Picasso and Chaplin met that year; unable to communicate, they mimed affably). Story’s sculpture of the same title renders Picasso’s Still Life with a Pitcher and Apples (1919) as a gurning music-hall entertainer, shuffling onstage with its belly popping out. In Story’s restaging of the modern past, playfulness is inextricable from invention, bred by necessity.

Spectres of early poverty haunted both men’s lives and work, and the promise of abundance in a bowl of fruit became as much taunt as temptation. In Story’s sculpture City Lights Still Life, the fruit that provides part of an iconography of indulgence in Chaplin’s 1931 film is rendered in grainy mortar, drained of sensual appeal, a cornucopia that crumbles in the mouth. The sandpaper grit of Story’s objects rhymes with the cubist fascination with materiality, the world as much felt as seen. Meanwhile, the painting Millionaire – a fleshy smokestack against a disjointed Cubist horizon – points to the stock villain in City Lights, a feckless moneyman out of kilter with reality, whose revival here pulls the fictions of history up into the light, startlingly.

Published on 12 May, 2012 More articles on Contemporary Artists