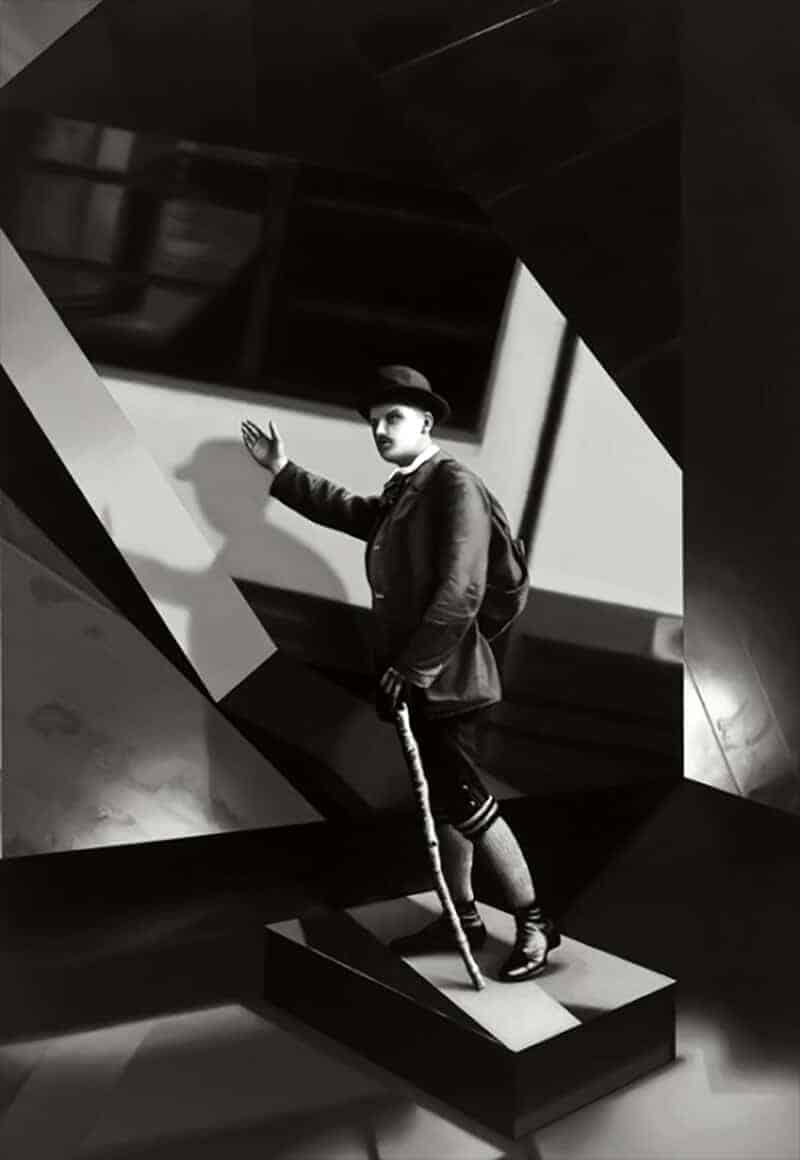 We invented perspective because we needed to be able to lie. We lied about ourselves in portraits that gave our clothes the shimmer it never really had. We lied about our pasts in historical scenes that made our marginal victories seem divinely ordained. We lied about our place in the social pecking order in the landscapes of our property. Perspective made the lies seem real. In Antonello da Messina’s tiny painting of St Jerome in London’s National Gallery, the saint – hovering over his translation of the Bible in a vaulted Gothic space – is at the epicentre of a spider’s web of centrifugal lines that imply the saint’s work as the still central point of the whole of creation. In Velazquez’s portraits, imaginary space measures out aristocratic power, which magnifies its potency in mirrors and paintings-within-paintings. Both Van Eyck’s convex mirror and Velazquez’s rectangular one are attempts to demarcate additional spatial possession. By the seventeenth century, the imagined pictorial space suddenly seems more real than reality itself; it contains more space. The lie takes over. Andrew Sendor’s recent paintings do this too: imagined images hang on imagined walls within imagined spaces. Lies reflect lies, endlessly.

Painting stopped being able to depict the future once it had learned how to lie. Think of medieval images of the end of the world: that flattened, nondescript space, filled with the howling tormented. Consider the blank golden nothingness of heaven, its denizens floating in divine ether. Rarely did artists of the fifteenth century attempt to apply the rhetorical tools of perspective to the eternal spaces of the afterlife, and when they did (as in Bosch’s paintings) they look not like divine spaces but real places invaded by fevered dreams. Perspective failed to fulfil rhetorical art’s ultimate goal: to describe the indescribable. The compressed space and ethereal light of medieval painting is still the best imagining of the Christian heaven. In Giotto’s Ognissanti Madonna (1310) the realist promise of the early Renaissance (overlapping haloes and a buck-toothed Madonna) bumps up against a stark, ineffable golden wall. The implication is that heaven is beyond the true or false: it just is. And since the afterlife is the perpetual future tense, its depiction eluded rhetorical description. The future is always perfect. Western painting after the Renaissance refused to allow itself to speculate, as though aware that any attempt it made to do so might suggest that that future state was itself a kind of lie. The pastness of Renaissance painting allows it to make the lies real.

Andrew Sendor’s recent paintings describe the future in terms of the past. Interiors that recede efficiently according to fifteenth-century pictorial principles – this in front of that, the doubling shadows of objects in a daylit room – are used to limn a vision not of the secure present or noble past but of the near future. Their stilled, held-breath atmospheres suggest this; their titles confirm it. All is stilled and held: videos stopped at a single frame, figures locked in time. The worldly and religious certainties implied by perspectival space (Jerome’s quill pausing over a translated verse) are inverted. This space is neither religious nor aristocratic: it’s a scaffolding of certainty that allows its opposite to be explored. Sendor’s paintings exist within the strange and contradictory tense of Roland Barthes’ caption in Camera Lucida. Under an image of Alexander Gardner’s photographic Portrait of Lewis Payne is written, almost casually: he is dead and he is going to die. This has happened and this is going to happen. The tension makes the paintings seem clenched, humming.

Installation shots – photographs taken to advertise a forthcoming exhibition – show gallery spaces as deserted, ideally depeopled, clinical, airless. As in Van Eyck’s poised portraiture, in these photographs objects continue to both occupy and magnify spatial territory. In real life, the objects themselves are bought and vanish: the photograph of their installation is the trace they leave behind. The installation shot describes the present in terms of the past, showing objects situated in real-seeming perspectival spaces. And those spaces define works of art as components in a larger system of value. Like their predecessors, installation shots are images of certainty. They are images whose apparent disinterest – the bone-white walls that isolate the works, all framed in classically composed photographs – belies a carefully composed system that places commercial objects as the still central point of a wider understanding about the world beyond. In other words, like all previous images of real-seeming space, they are proposals of a kind of organised reality. The scenes of the painting are emphatically present, pushed deep within a web of receding lines, and yet – unlike the installation shots and Renaissance interiors it recalls – the organising centre is obscure to us, its system of value uncertain and nebulous. A lie can hold a kind of comfort if we understand its source. Yet this strange future stares back, unblinking, mysterious, its vanishing point doing just that: vanishing, before our very eyes.