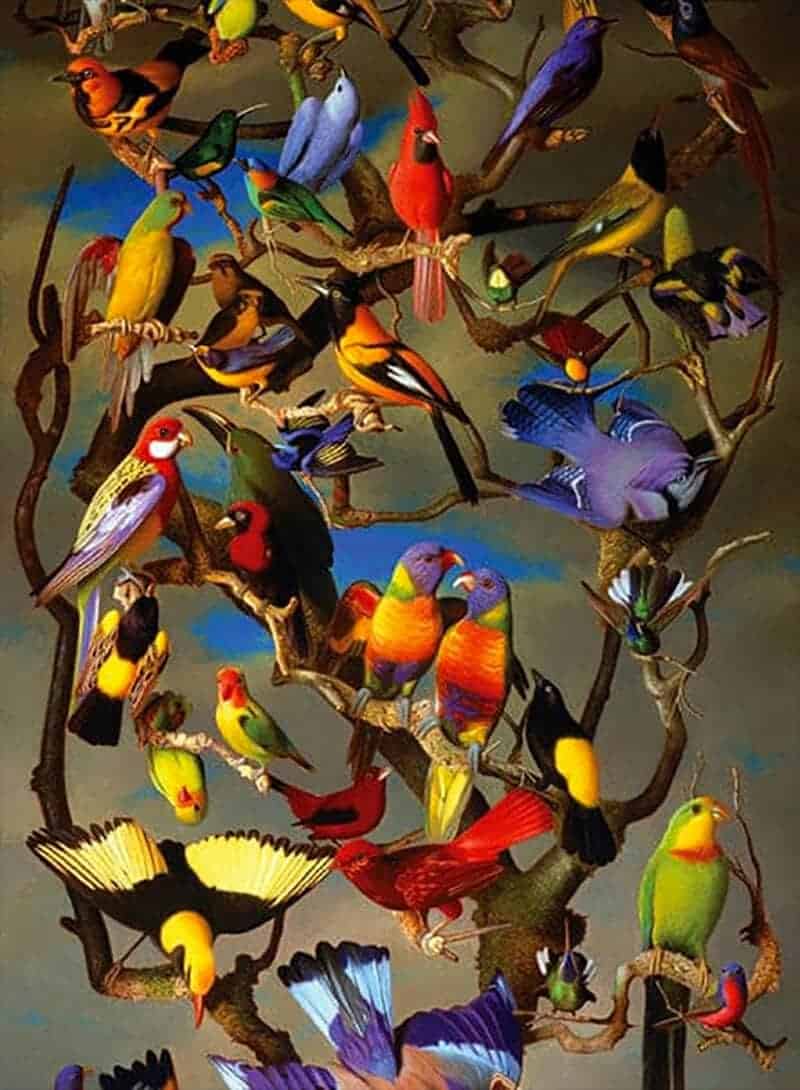 ‘Painting is dead’ is dead, and now we can move on and discuss what it is, exactly, that keeps painting alive, despite everything. Despite (in vague chronological order) the Reformation, the printing press, photography, cinema, advertising, conceptual art, performance art, installation art, video, television, the Internet, and the countless other ways the act of applying matter to a flat surface has been battered since its invention in those dark days in dark caves. Painting continues and will continue to continue, even though its central place in western culture has long since been relinquished to other, more immediate media, a lack of immediacy being something paintings uniquely possess, as opposed to everything else. If paintings made today can be said to have any shared characteristics, it might be this undercurrent of incredulous continuance, an amazement, rarely voiced, that it’s not only still possible to make paintings, it might be something we need. It can’t go on. It goes on.

The perversity of painting is what draws us to it now. This is a physical thing made slowly, made to be taken in slowly, made during a time in which the speedy, the instantaneous and the disembodied characterise our relationship with the world around us. Painting – while perfectly capable of reflecting and translating the speed of cultural changes that whizz around it – is a still centre, a stubborn thing resistant to new ways of seeing that the world obliges us to adopt. This exhibition features paintings divided by a common language; that’s what painting is now. Take, for instance, the work of Tamsin Morse: the picture’s resolution is perpetually tripped up and delayed by delicate scrims of painted marks, so that landscapes – opening valleys, bristling woodland – feel entered into by being looked at. Similarly, Tom Hammick’s paintings synchronise the looker and the looked through proxy personages, whose absorption into the painting’s surface imitates our own. Joseph Uvieghara’s work does something comparable, locking the figure into surfaces of sliding colour, the human turning into paint. These artists allude to travel and transformation as metaphors of visual experience: we enter and are changed. This is painting’s rejoinder to the jouncing act of looking born of modernity’s glut of imagery. The eye, observing a painting’s densities, syncs with the body’s own sense of time passing.

Matthew Burrows’ work posits the painting’s surface as a cramped stage on which the world clambers, and in doing so, confuses itself. Roles swap: a flower’s petals mimic flaps and folds of human flesh; a big toe becomes a small hill. Rushes of paint meet the graphic mark in a push and pull of hesitancy and confidence. The painter’s body – implied in any painting, its absent movement hovering like a cloud over the surface – describes a mode of looking. The eye and the hand are the same thing; roles swap. Chris Gilvan-Cartwright’s paintings, meanwhile, create interchangeable allusions to the body and the world, the inner and the outer. The painting is a body, the stuff of paint a casual metaphor, as it always must have been, for flesh itself. Embodiment is all.

Nicholas Pace’s paintings, like the dioramas of natural history museums, act as frames for understanding. Collections of painted objects – ceramic animals, flowers and fruit – share the common territory of recessive space, literal common ground. The act of painting is one of concentration, a painterly translation of the mind’s own movements. Perspectival space is a box in which ideas are placed: this is like that, and that goes with this. But the painted space is a way of lying, too, and the rhetorical devices of Renaissance painting (further/nearer, sharper/softer, smoother/rougher) are corollaries of words in a sentence that say one thing and mean its opposite. Louise Bristow’s works do this too: their spatially accurate transcriptions of arranged objects, whether postcards of famous paintings, architectural models, or cutouts from photographic sources, establish a deadpan fiction of veracity. In both Pace and Bristow’s works, painting’s historical possession of truth about the world is a thing to be inhabited for playfully serious ends: a house to be ransacked, then lived in.

Yet painting’s claims on truth are always also contradicted by its mode of conveyance – paint itself, dust suspended in glue, which calls back, continually, to its origin as organic stuff, the matter of the indifferent universe outside. Christopher Stevens’ 2008 The Anatomy Lesson is painting talking to itself: an image of globs of paint as a landscape of slippery folds, rendered with meticulous naturalism. Stevens’ painting is a representation of paint as primordial goo, the stuff of mud and sludge, translated through a technique that holds that fact at bay: the painting shows a mirror to itself.  The act of painting is itself an interpretation of things, a way of making sense of the world through the material of which it’s composed (eggs, rocks, wings, shells). And yet the world shows itself in matter, and by extension, matter shows us too: we get in our own way.

Oscar Wilde’s portrait in ‘Dorian Gray’ remains one of the best metaphors for a painting’s unique force: it lives and we die. As you look at a painting of, say, a candle flickering in a darkened room, you’re dying and it isn’t. Its perennial present tense – the trace of a living hand, describing something that itself will splutter out soon – is a painting’s best trick: the artist is still here, it seems; mortality is suspended, it seems. Hence the special power of the memento mori: the artist thinks it’s all those skulls, hourglasses and floating bubbles that will remind his viewer of life’s brevity, but it’s the painting itself that will do that, like all paintings do. What will survive of us is stuff.

benstreet.co.uk uses cookies to analyse traffic via Google Analytics and to improve your experience while visiting the site.OKLearn more